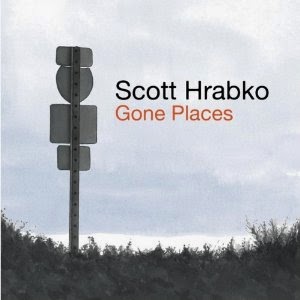 I hate to admit it but I'm a little late to the party with this album. Released in December of 2013, I'm just now catching up with it. But that's probably as it should be. In many ways Scott Hrabko is late for his own party as well. He's been making music and touring the great Midwest for over twenty years, but this is his first album. The time touring and honing his craft has paid off though, because Gone Places is a fantastic Americana "debut."

With a well seasoned baritone voice, these songs pour out of Scott like a vintage, robust, red wine. Starting with the laid back, barrel house sound of "Black Penny," Scott Hrabko tells stories of his travels across America and some of the "gone places" that have faded from the landscape but not from memory. Singing, "pursued by the blues and skeleton crews through the lowlands of my soul," Scott paints a lyrical picture of chasing dreams that never seem to come true.

On "Blue Period," Scott picks up the pace a bit with a Dwight Yokam inspired investigation into his wife's talking in her sleep. He sings, "When you talk in your sleep and keep me awake, the least you can do is enunciate. Your train of thought just passed my stop. Somewhere down the line, honey, you must get off."

"Baby You Know Me" is a straight Country Blues with the great lyric: "I used to be a king bee, a collector of nectar, everywhere I roamed... But somebody's wife is lonesome tonight. I'll make a beeline home." Blake Shelton needs to take notes from this guy.

The instrumental, "How's Your Toe," follows with great jazz inspired guitar work. Then Scott goes back to working his lyrical magic with another barrel house blues number, "Lost As  You." He sings, "I'm scrapping for a dollar and a quarter out on Dead Dog Boulevard. Two left shoes and eleven bar blues on that old gold tooth guitar. It's old man sweat and a cigarette in tears in Tennessee. Singing 'goddamn, I love women, especially when they don't love me."

Scott turns his wit on the naysayers around us in the chooglin' "The Ugly Ever After:" "They've been talkin' 'bout the end of the world since the beginning of time. But it's only real in the ugly ever after in you mind."

Scott's wit and insight shine through in every song on this collection. He brings a perspective that can only come from a lifetime of (sometimes painful) observation. His lyrical sketches are effortlessly 'matter-of-fact,' yet so poetic in their phrasing. Just to give one more example from "The Woman Upstairs:" "She was chaste as a racetrack rabbit. I was holy as a hobo's shoe. We were broke as the Ten Commandments. There was nothing much else to do." Can you imagine a more poetic way to say "we were poor?"

But luckily Scott's talent goes beyond his words. The music on the album is every bit as expressive as the lyrics. Ranging from Jazz to Blues to Rockabilly to Texas Swing, Gone Places virtually defines the subgenre of Americana that has come to be known as "Porch Music." You put this album on, grab a pitcher of your favorite beverage and sit back on you porch and let the world go by - and maybe even daydream about the gone places in your own memories.

Posted by Family Reunion at 8:16 AM