Album Review: Blood Like A River by Nathan Bell 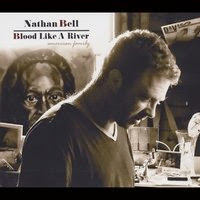 Nathan Bell’s voice stands out like a man among boys in today’s Country music scene. From the first verse of “Names,” his voice resonates like a cross between Merle Haggard and Ralph Stanley (and more recently, Steve Parry). It is a voice that commands attention. And listening to the lyrics of his new album, “Blood Like A River,” it is attention well deserved. Venturing far from the well-worn topics of cheating hearts and bar room upstarts, Nathan dives deeper into the human condition.

On the lead song, “Names,” Nathan introduces himself as Private John David McCutcheon. Exploring a soldier’s point of view, he sings, “I played safety on my high school football team. We even won a couple of games. But they stand silent at halftime now, for I am just a name.” It is a simple, yet powerful acknowledgement of the lives behind the statistics when adding up the cost of freedom.

On “Really Truly,” Nathan explores an even more controversial topic. Dealing with the subject of gay marriage, he sings, “Jenny said I love you and Jill gave her a ring. They got married in their mama’s wedding gowns and really truly it didn’t change much of anything. The sun kept coming up and going down.” Taking a stand on either side of this issue is not for the timid. But by zooming past the big picture and focusing on individuals, Nathan is able to peel back the slogans and rhetoric and offer a glimpse of the actual hearts and souls of those most affected by the debate.

Nathan reaches deep within to grapple with the tangled tapestries of love, family, and even our own mortality throughout the album. With a sparse, acoustic guitar or two as the only accompaniment, Nathan’s voice and lyrics demand that you hear what he has to say. And if you pay attention, you’ll realize that as he sings in the title track, “Blood like a river brings us together. Blood like a river ties us together.” And in the end it is the same blood that flows through all of our veins, and we are all in this together.
Posted by Family Reunion at 1:30 PM